Hi! We are very much looking forward to our next performance, and haven been practicing for this event over the past month. Its not been overly stressful, as we are re-performing some material we have previously learnt and performed, however, its quite startling how much we had all forgotten, and there has been some re-leaning to do hear and there. We will be singing four short sets of songs amongst and evening of music and dance, here is our event's postcard, you may find one of these lurking around cafes and bars in Edinburgh in the coming weeks...... 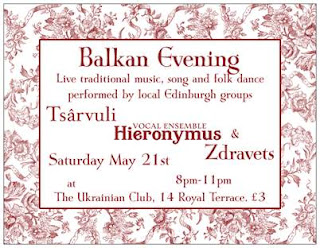 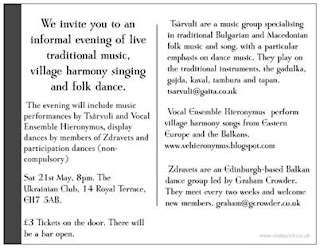 We will be performing some songs from our summer concert last year on the theme of love and loss, and later in the evening when are under the influence of a few vodkas and some attempts at dancing, we will move onto the more complex songs in the set, that we performed at our Christmas concert.  It will be an invigorating and enjoyable experience for us to perform these beautiful and moving  songs such a lively, informal and varied evening. We very much hope you will be able to come along!
All the groups involved in putting on the evening are Edinburgh based, and we will be taking it in turns to provide the entertainment. Tsarvuli play traditional Bulgarian and Macedonian instruments and perform a wide range of folk music aimed at folk Bulgarian folk dancing, I have had the pleasure of being a member of Tsarvuli for the past year and a half, and have greatly enjoyed trying to catch up with there 20 years experience and repertoire. I sing and play Tapan (large drum) with Chris, Cait (of Gaita) and Graham (who also leads the dance group). Grahams dance group are called Zdravets, there more experienced members will be performing some amazingly complex dances for us on the night,  it is truly thrilling to watch, and also will be teaching some easier dances for everyone to have a go at. If its something you would like to experience again, the group meet every second Thursday, and are always looking to welcome new members. Come and give it a try, its very good exercise and a lot of fun.
The venue is The Ukrainian Club, 14 Royal Terrace, Edinburgh, EH7 3AB
£3 on the door. The Ukrainian Club will have there bar running.
Posted by Vocal Ensemble Hieronymus at 19:49 1 comment:

Interview with Chris Elmes on the Libre Vermell

Helena: It captures the spirit of the pilgrims?
Chris: Yes. And also not go for an insufferably reverential way of approaching music. Because I don't think that was how it was necessarily done. Possibly some choirs of monks may have done it that way, but I don't think that holds when you get out into the real world.
Helena: And, have you any Libre vermell trivia or anecdotes you can share with us? You did mention something about the cover of the book?
Chris: Yes. Its actually called the Libre vermell, it got that name in the late 18th or early 19th century, when it was rebound in red leather.
Helena: Oh, red leather. I thought it was red velvet?
Chris: Possibly red velvet. Or red leather. Libre vermell just means 'red book'.
Helena: Thank you very much for sharing your thoughts!
Chris: Half an hour of waffle! That's going to take a while to transcribe!

All of Chris Elmes' publications of medieval music transcriptions are available to purchase from Gaita's website, please find the link below.

Posted by Vocal Ensemble Hieronymus at 22:26 No comments:

Welcome to our blog! We are Vocal Ensemble Hieronymus, a 10 piece vocal group based in Edinburgh. Having never had a blog before this is all very new to us and so may take us some time to get into the swing of it.
We would like to say a big thank you to everyone who came to our most recent performance on the 18th December last year, when we performed 'Winter Songs' at St.James' Church, on Inverleith Row. Other than it being a cold night, we all enjoyed ourselves and appreciated having such a attentive and complimentary audience. As soon as we have any further concert dates, we will announce them here first, so do check back when you can. It may not be until the spring at the earliest though, as we are embarking on some new material, and have ambitious ideas about what to do with it!
This year, Vocal Ensemble Hieronymus are working on medieval music, primarily from the Llibre vermell.  The Llibre vermell is described by Chris Elmes in his performers edition transcripts, as "one of the most important collections of Spanish medieval songs".  The Manuscript originates from the monastery of Montserrat in Catalonia, and was written in the late 14th century.
It presents the following 10 songs, 'O virgo splendens', 'Stella splendens', 'Laudemus virginem', 'Splendens ceptigera', 'Los sept goyts', 'Cuncti simus', 'Mariam matrem', 'Inperayritz dela ciutat ioyosa' and  'Ad mortem festinamus' . We have previously worked on and performed 'Ad mortem festinamus' at our summer concert of songs on a theme of 'Love and Loss in the summer of 2010', although, Ad motem only really fitted the theme tenuously, with the implication being of the importance of "Renouncing" one's vanity. Ewan performed a solid and rousing lead vocal with the other  members dueting on a verse each, it was a lot of fun, but descended into giggles at various points, probably due to the fact it was the last song in the set, and every ones concentration had slipped  with the  relief that we had nearly got through the 'ordeal' of our first proper live performance! We had also worked on the two canons 'Laudemus virginem' and 'Splendens ceptigera' although these were only performed by myself (Helena) and Carole after an informal concert we did at Chris and Cait's(Gaita) flat, unfortunately due to the fact that most members had gone home by this point, Carole and I didn't necessarily do them justice after several false starts and some general confusion....to be worked on again and performed properly in the near future.
2011 has kicked of with 'Stella splendens' and 'Maria Martrem'.
Posted by Vocal Ensemble Hieronymus at 13:05 No comments:

Vocal Ensemble Hieronymus
Edinburgh, Midlothian, United Kingdom
Helena MacGilp founded Vocal Ensemble Hieronymus in early 2009 to satisfy the interest of a few friends who wanted to embark on some choral singing. Over a year on they have grown into a solid 10 piece who meet weekly to talk, drink wine, eat hot puddings and oh, yes,rehearse! Helena has a background in art and music. Having performed in various Edinburgh bands she currently performs with Balkan ensemble Tsarvuli and Edinburghs' medieval specialists Gaita. 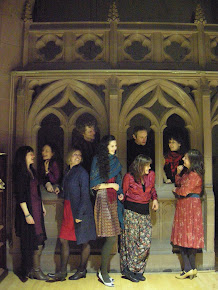